Remember the cool map that we have for the shirt design?

The medals that you will receive for each region will be that region from that map, complete with all the details. Each medal will be cut to match the current national borders (adjusted of course to the map which was created with 16th century technology).

Each medal will come in its own little display case. So, if you only do one, or a few of the regions you will have something suitable for display.
However, if you do complete your circuit of the entire earth, those individual medals will fit together like a puzzle. Each Hemisphere would be 15 inches in diameter. You would be able to get a “frame” to fit them in that would give you a beautiful “picture” of the 16th-century world map…. considering that the hemispheres would each be 15 inches across, we are talking about a display that is about 32-36 inches wide and 16-18 inches tall. Personally, I think it would be quite a nice looking item even without the backstory of your year (or two) long voyage around the world.
For a project that could well take years to complete, it seems to me a quite appropriate award. If you only do a part of it, the individual medals will still be something you can display that looks quite nice.

Now, the vendor’s suggestion was a little less than that. It was basically a folding cardboard sheet with printing on it and slots for the cardboard pieces to fit in.

The vision for this journey is not quite the same as that for the RAT. This is a chance to maintain the consistency that the RAT was looking to develop. It is not a matter of going out and hammering out miles to finish it as fast as possible. This is 3000 miles each, not 600. Success will come from keeping up a steady effort. Following your progress around the globe is just a way to motivate yourself. A daily reward of seeing yourself move somewhere and accomplish something. Exercise just to exercise, what fun is that? But getting somewhere. Reaching that next city, or the next country, now that can be fun. Completing a region, and collecting that next medal. That is a tangible return on your effort. Having a team of people working with you to achieve a common goal, That is motivation. No one could make it by themselves, but together y’all can achieve some staggering numbers… 30,000 miles is really far. It might not sound like it, but that is really far. Belonging to a worldwide community of pilgrims undertaking the same trek. That provides support. All of the fascinating things to see and learn as you slowly make your way around this enormous planet. Well, that is just fun. Along the way, all those other extras that came with the RAT are there, and even greater. Watching the seasons change in your own home place. Getting to know your neighbors. Not to mention that physically and emotionally there is nothing as beneficial as just getting outside and covering ground.

Now, if your concept of a “virtual” race is that you pay an entry fee and then later on report that you are finished and get a medal in the mail, maybe this is not going to be for you. This is set up for people who want to be engaged in the experience.

This is going to be amazing to get all the pieces at the end to make one big map. Thanks for the details. Can’t wait to get started today! #TeamUltraCrawlers

Laz, I did TGVRAT and another race across the US. You are so right, this is something much more than register and get a medal. The experience you gave us for the TGVRAT was exceptional and what you are already creating here looks to be the same. The other race I joined is a waste of money. The community, the maps, the highlights and travel guides are amazing. And beyond even this, is the community our team of ten has created. THanks. 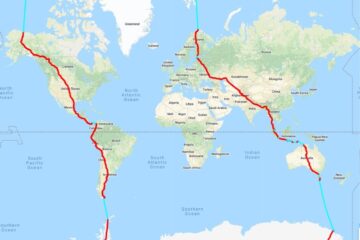 Taking the time limit off for an absolute finish of the Circumpolar Race Around the World does not relieve you of the time pressure….Because all treks are not equal, there is still a target to Read more…