When you think of the stereotype of a banana republic, you are thinking about El Salvador.

Before the Spanish Conquest present-day El Salvador was in the territories of three different indigenous states along with several principalities.

After the conquest Central America was part of a single colony known as New Spain. When Napoleon occupied Spain in the early 1800’s revolts broke out across the empire, including in New Spain. El Salvador was fortunate enough to be a backwater over the next 50 years, as New Spain painfully extracted herself from Spanish rule. There were many twists and turns affecting all of Region 1 between 1820 and 1870, during which New Spain became the Empire of Mexico, and one point when it was taken over by the French under Napoleon III and an Austrian became Emperor Maximillan. Along the way, the countries of Central America split off to become the United Provinces of Central America with the approval of the Mexican Congress. This union was short lived, before splitting up into the countries we see in Central America today (with the exception of Belize, which was a British colony until 1973).

Early El Salvador had a one crop agricultural economy, depending almost entirely on the export of Indigo. When chemical dyes wreaked havoc on the Indigo market in the mid 1800’s, newly popular coffee replaced Indigo as the primary crop. This was most unfortunate for the indigenous people of El Salvador, because Indigo was much more particular about where it was grown, and they had been left to subsistence farm much of the unusable land, particularly the volcanic slopes…. where coffee would flourish.

El Salvador’s answer was to pass “vagrancy laws” and displace the rural population so their land could be absorbed by the coffee plantations. Little has changed in El Salvador since then, despite various revolutions, dictatorships, and US government interference (generally in support of various dictators) and even under the current elected government. In the 1800’s all of the nation’s wealth was in the hands of “14 families.” Today it is all in the hands of 8 corporations. As a result, El Salvador is one of the most dangerous countries on earth. Guatemala was just a warm up. You will notice that in El Salvador there is not even a Google street view.

You might curse Bad Mike for routing us thru El Salvador, but we could not go down the middle of the mountains, and on the Gulf Coast we would have to pass thru Belize. El Salvador is only one of the most dangerous countries in the world, not the worst. It is not even the worst in Central America.

Every place has a different side. While Coffee and now sugar are the primary export crops, El Salvador’s subsistence farmers grow beans, rice, oilseeds, sorghum, and most of all, Corn.

Corn is the traditional staple of the El Salvadoran peasant diet (and their indigenous ancestors going back thousands of years.)  El Salvadoran corn is white-colored and is ground into flour, roasted, boiled, or consumed in any number of ways, including the national drink Atol de Elote, a thick, sweet drink made with corn, sugar, milk and cinnamon. I am thinking that the cinnamon is not a vintage ingredient in Atol de Elote, since it comes from the orient!

Corn occupies a similarly hallowed place in all the Mesoamerican culinary traditions.

We do have one major landmark early in our passage thru El Salvador. 30 kilometers into the country we cross the “new equator from the west side to the east side. We will not cross it again until we reach Antarctica. At 2230 kilometers, we finally leave the coastal plain and climb up and up, crossing the flank of Volcan de Santa Ana and followed by a long, steep descent to reach the base of the equally steep climb up the Coatepeque Caldera,

Which is worth a short side trip if the crater lake at the top performs its amazing feat of turning turquoise blue while you are in the vicinity. (Salvador 5.1) We will drop down the other side to reach the first major city we have encountered since Veracruz. San Salvador, 2300 kilometers into our trip, is the capital of El Salvador.

Shortly after passing thru San Salvador we will pass massive Lake Ilopango, a volcanic caldera now filled with water. Like the mountains, Lake Ilopanga’s beauty belies a violent past.

After Lake Ilopango we will continue our trip thru the numerous volcanoes, including Volcan de San Vincente, Volcan Chimameca, and Volcan de San Miguel, before passing thru the city of San Miguel on our way to Rio Goascoran, and the Honduran border at 2500 kilometers.

You need to be very aware of people waiting at the border to scam you. Do not hand over your papers or make any payment to anyone except Government Officials! Proceed to Immigration.

As you approach the Goascoran on Hwy 1 you will see a bridge directly in front of you. Even tho your map shows that as the crossing, do not attempt to cross there. Hwy 1 will have a fork to the left (also Hwy 1) that you will need to take to reach the Migracion Office. The Customs office is on the right, immediately after the speed bump. There you can make two copies of your Passport. The Immigration Window is at the end of the building, and you will get your stamp there. When you cross the bridge, a guard will stop you and check your documents.

On the Honduras side you will need to fill in an immigration form at the Aduana Office to get your Passport stamped in the Migracion Office. The fee is $3 US, unless they demand payment in Lempiras. Your stamp entitles you to 90 days in Honduras. So you will have to keep running or riding once you get in! Go to a copy place and get copies made of your stamped Passport and return to Aduana. Turn in all your papers and then go to the Police Checkpoint. There your documents may or may not be checked…. There also may be fumigation measures in place. After 2500 kilometers, you might need fumigating.

My family and I have done eight day excursions to El Salvador three out of the past four years with a church group. Our home base is always San Miguel at the Hotel Tropico Inn on Roosevelt. Each day we would load up many huge burlap sacks full of staple food items on an old Mercedes bus and head out to surrounding towns and villages – Chinameca, San Louis de la Reina, Santiago de Maria, Berlin, Conchagua, El Rebalse, and La Pacifica, to name several.
As mentioned above, the country’s history of violence is pretty staggering. The gang presence is staggering. The poverty is staggering and so is the heat. However, the pride and strength of purpose with which the folks go about their lives is pretty inspiring. Add to the violence, the poverty, and instability the prospect of living in a country that is entirely volcanic (these craters are smoking everyday) and you begin to see an attitude toward life that we don’t experience here in the U.S. This, and so much more, eventually bring to the awareness of the conscientious visitor what it means to have Western privilege – we’ve got it exceptionally easy and we don’t know it.
You don’t spend long in El Salvador without eating pupusa (picture a sandwich of grilled tortillas with some beans, cheese, and maybe a scrap or two of chicken or pork). They come of the grills piping hot for as little as 50 cents (locals pay half that, of course) and they are delicious.
One of my favorite places I have been to in El Salvador is the Las Cien Grados in Alegria. Alegria has a somewhat higher elevation than San Miguel so it always feels cooler, which is a relief. Cien Grados, or One Hundred Steps, overlooks the surrounding valleys and hillsides where lots and lots of coffee is grown. I’ve raced a couple of young men up these steps and it got my heart rate up, for sure. There’s not a lot of places I feel safe running when I’m down there, so I take what I can get. 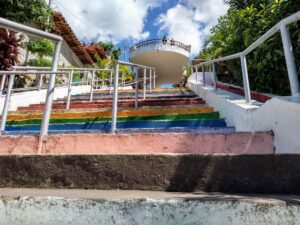 I adore pupusas!!!!!!!!!!! My friend with roots here taught me how to make them about a month ago and they are now a family treat. I’m very intrigued by the “Atol de Elote” drink, and am starting to think that I won’t lose much weight even with all the miles if I insist on eating and drinking through all the countries.

Naresh here, co-rd of CRAW. Do you mind sharing the recipe for Pupusas. I am sure our viewers would love that.