Travel through Mexico to Central American Countries (From Banderas News):

Mexican authorities require that all international transit of persons ( transmigrantes ) and merchandise from the U.S. through Mexico, destined for Central America, be handled only at the Los Indios Bridge located south of Harlingen, Texas, on Route 509. Every transmigrante must obtain the services of a Mexican customs broker to prepare the documents required by Mexican Customs for their entry into Mexico.

Transmigrantes must declare everything they are bringing through Mexico or any undeclared items found by Mexican Customs will/will be confiscated. Although items for international transit are not taxed, transmigrantes will have to pay a fee to the customs broker for their professional services. The customs broker is responsible for informing the transmigrante about items that are prohibited for international transit.

Crossing into Mexico by a bridge other than Los Indios is considered importation of goods and will result in everything being taxed. When the transmigrante leaves Mexico through Chiapas, he must then also pay export taxes. The earlier “import” tax is not returned.

Transmigrantes on their way to Central America have ten days to leave Mexico through Chiapas. Mexican Customs now has a barcode system that controls the entry and exit of transmigrantes.

Americans who intend to transit Mexico are cautioned that some unscrupulous vendors on the U.S. side, known as “ grupos, ” purport to be Mexican customs brokers but are not. “ Grupos ” have been known to charge large sums of money but do not provide the required services that only bona fide Mexican customs brokers can, potentially leaving the American transmigrante bilked and his goods confiscated.

Currently, there are only two Mexican customs brokers handling transmigrantes. For further information, travelers can contact the U.S. Consulate in Matamoros prior to departing the U.S. at (011-52) 868-812-4402 and ask for the American Citizens Services Unit, or visit the Consulate’s Web site at http://mexico.usembassy.gov/matamoros/matamoros.html

Will our passports come with permits from the Mexican consulate? (I’m loving this already!)

How I Almost Got Left in Mexico

Let’s travel back in time to 2010. On an reluctant cruise ship vacation we found ourselves on a beautiful beach in Mexico enjoying delicious food prepared by locals. Drinks were flowing, the water was beautiful, and all seemed well. Or so we thought. Around 12 pm, I had asked another couple what time it was so I can be sure to make it back to our cruise ship dock in time to enjoy our evening entertainment at the casino (I know, typical American).
Fast forward an hour later to the tequila bar that was, let’s say, a very provocative experience. Shots were flowing, sombrero’s were worn, and bad decisions were being made. Somehow throughout this debauchery we remembered that we had to catch our boat at 2 pm to travel to the next island and most likely sleep off this terrible tequila hangover.
As we approached the dock in a state similar to Raul Duke from Fear and Loathing in Las Vegas, we were standing in line with hundreds of other random vacationers in hopes to make it back to our cabin to forget all these bad decisions that were made.
It was finally are turn to board, we were almost there. But suddenly, shit got real. The Dock Master explained our ship had left. “What do yo mean, IT LEFT!”, I said. Turns out, the ship left an hour ago and my young naive self didn’t realize when I asked the couple for time that each ship is on running on different time zones.
“SO WHAT DO WE DO!”, I exclaimed to the Dock Master. He turned away to speak to his buddies, and we were in panic mode. After a few minutes of thinking all was lost, the Dock Master pointed to a small janky boat about a mile away that he told us to “RUN AS FAST AS YOU CAN” to. Somewhat sober at this point, we jetted with our ridiculous sombreros on our heads to the small dock in which the boat resided. As we ran off, the Dock Masters last words were, “I HOPE YOU HAVE MONEY!”.
As we approached the small boat, we were confronted by 4 native males who at the time we thought were pirates but most likely fisherman. They didn’t speak a word of english and communication was a struggle. Each of them kept saying “money” “MONEY!?, and proceeded to pat us down and see what we had. WE WERE TERRIFIED!
A few minutes later, conversations silenced, we were told to sit down and suddenly we were being taken out onto the the vast see on this tiny little fishing boat.
We were on the water for about an hour or so until we approached our cruise ship. During this ride, no one was talking, all you could hear was the splashing of the waves. The boat slowed down, pulled up to the massive cruise ship and to my surprise a rope ladder from the middle of the ship was thrown down to the water. The fisherman pointed to the dangling rope and said “CLIMB!”. So we did.
Here we are, finally sober and climbing up the side of a cruise ship on a rope ladder wearing sombreros. Yeah, I was that guy.
It felt as though we where climbing to the top of the Empire State Building with how far we had to go to get inside the ship. We believed this was all ending so well, WE MADE IT BACK! But oh no, it was not over.
As we pushed ourselves inside of the ship, we were confronted by over 50 armed guards waiting to pat us down for any illegal substances. We WERE STILL TERRIFIED.
After another half an hour of this shit show, were were finally cleared to board the ship and safely make it back to our cabin.
You’d think we would have learned our lesson, take it easy, and maybe go back to our cabin for a much needed recovery nap for this experience. BUT NO, WHAT DID WE DO?
We went to the bar, ordered tequila shots and told everyone on the ship our story of how we almost got left in Mexico.


P.S. I will never, ever go on another cruise in my life. 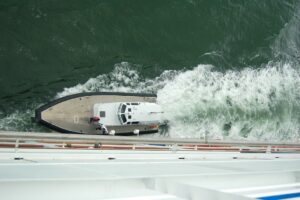 Fabulous story!! Reminds me of the time in Puerto Vallarta on my honeymoon when my husband and I got on a random bus and ended up far away on the hills above PV. The bus stopped in front of the driver’s house at the end of his shift. He made us get off the bus. We walked back to town through the real Puerto Vallarta. Scary moment… Memorable adventure.