Entering Guatemala from the Mexican state of Chiappas, we are finally in the heart of Maya country.

So often we think of the succession of MesoAmerican cultures as almost monolithic. The Olmec, Toltec, Maya, Aztec, etc. as if they held sway over the entirety of Mexico and Central America, with one developing on the ruins of the last. The truth is that the entire region consisted of multiple peoples, much like Europe. And, while the Roman Empire no longer exists, there is still an Italy. While the Holy Roman Empire no longer exists, we still have France and Germany.

Similarly, while the various Mesoamerican empires are long gone, their descendants still occupy their old homelands. The Toltec and Aztec Empires were centered in close proximity, but the Maya and Olmec had only a small overlap with them and somewhat more with one another. The question of “where did the Maya go” has been answered by the time we enter Guatemala.

They are all around us. The real question would be “why did the Mayan Empire collapse?”

The fates of the native peoples of Region 1 varied when the Spanish arrived. The Carribean Plate across which we are traveling owes its name to the Carib, the island dwelling Indians that were encountered by the Spaniards. Through disease, war, and brutal slavery those who occupied desirable land were decimated. The Carib were the first to be virtually exterminated. The Carib themselves are thought to be related to the Carib Indians of South America, although they speak an unrelated language. However, we delude ourselves with the image of the Carib as peaceful, island dwelling people who were brutally wiped out by the Spanish. The Carib themselves were a warlike people (reputedly cannibals) who were in the process of expanding and driving their predecessors, the Arawauks, from the islands. It was the unfortunate Arawauks who were first encountered by Columbus.

Up to 90% of some groups were wiped out by smallpox. Those who occupied desirable land were subdued and pressed into slavery or driven out. The Caribbean Indians were reduced to almost nothing, and when the supply of native slave labor was exhausted, the Spanish began importing African slaves.

However, in the more inaccessible locations, particularly if there was a lack of mineral wealth, some indigenous people were minimally affected until recent times.

In the mountainous interior of Guatemala, the native culture still dominates. It is the poorest of the Central American countries and has the worst infrastructure. You will be well aware of that as you make your way along the shoulderless, narrow 2 lane road, with the coastal plain to your right (west), and the rugged mountains to your left (east).

As a physical landscape, Central America did not even exist until the last 3 million years.  The whole thing started about 20 million years ago, when there was open ocean between North and South America. The Pacific Plates moving east collided with the Caribbean Plate moving west, with the Pacific Plate sliding under the Caribbean. The friction melted the submerging Pacific which resulted in volcanoes bursting up through the over-riding plate. At the same time, the sea floor at the leading edge of the Carribbean Plate was rolling up in front of it, like topsoil in front of a bulldozer blade.,,,

In the twinkling of a geological eye (about 17 million years) a ridge of land built up in pieces until it extended all the way from North to South America, cutting off the flow of waters between the Atlantic and Pacific Oceans. The forming of Central America was the most significant geological event of the last 60 million years, completely altering the ocean currents, and with them the climate of the entire world.

Of course we perceive this ongoing collision in super slow motion, but while passing thru Guatemala we have a good chance to feel the instability of the land beneath our feet and wheels. Earthquakes are commonplace and volcanic eruptions a regular occurence, as Guatemala sits atop the Motagua and Chixoy-Polochic fault complex. We are at ground zero during our 340 kilometer trip across Guatemala.

Your trip across Guatemala will be a journey of sameness, yet without ever knowing what is around the next bend. Since you will be traveling along the Pacific Coastal Plain there will be little elevation change.

The highway will be a narrow, sort of two lane, with no shoulder, heavy foliage and overgrowth along the sides with occasionally heavy traffic. At the same time it will be an adventure of wondering what is coming up next: Farms with row crops, ramshackle houses with animals in the yard, narrow bridges over streams, rivers, and canals, and picturesque small villages that seem more like movie sets than real places.

While bananas and coffee are more important economically, the bananas are grown more on the Atlantic Coast, as the interior mountains create a rain shadow over the Pacific Coast much like the Sierra Madre Occidental blocked rain from the Mexican Gulf Coast. Coffee is grown in the rich volcanic soil in the mountains. Where we are traveling sugar cane and cotton are the most important commercial crops.

At last, 2185 kilometers into our trip, we come to Hacienda Vieja on the Rio Paz (the River of Peace) and the border with El Salvador.

When you come to the Guatemalan Migration, stop at the first building on the left (blue and white and long). Walk along the building until you come to Migration and get your Passport stamped. Walk across the street to the purple building and make a copy of your stamped passport. Return to the blue and white building, There is an opening in the center, where you can walk thru to exit Guatemala. There is a door on the left. Knock on that door to get the security guy to let you in. Turn in your copy of your stamped Passport. Note: you cannot re-enter Guatemala for 90 days, so have everything with you!

Show your Passport at the bridge.

When you get to Migration El Salvador, first stop at the window marked Migracion. Then go in the doors marked Aduana. They will ask you to make some copies and charge you $5. This will be one of the easiest border crossings you will have in Central America!

The travel guide we have is just a starting point.

The one picture in the narrative that shows a town street with a gate and a volcano behind it is of Antigua, the old capital of Guatemala. It was in an earthquake prone area and was severely damaged by an earthquake so the government built a new city, Guatemala City using the exact same streets and blocks as Antigua. The people were then supposed to move into their new home. Many did but many remained behind.
They say you can never get lost in Antigua, just locate the volcano.

Around Lake Atitlan there are several communities (12 if I remember correctly) where the people, particularly the women, continue to wear the traditional dress. If you know the “code” you can tell which village a woman is from. Each village has a particular pattern they use in their skirts, sort of like the Scottish plaids. .

I agree, I’m Guatemalan and the 12 communities are referred to as the 12 apostles (that is how I remember – LOL)

Antigua has suffered from so many earthquakes that the inhabitants finally gave up rebuilding the town. When you travel the streets, the architecture and art of the many buildings that have survived is amazing, but also quite surreal among the ruins of so many that did not.

The Crested Caracara, one of my favorite birds and the one that got me into birding, is found throughout the American tropics. I photographed this one in my property in South Texas, which is at its extreme northern area of its range, but be in the lookout for one as you traverse Mexico, Central America, and points south. From Audubon Guides: “Related to typical falcons, but different in shape and habits, the Crested Caracara is strikingly patterned, broad-winged opportunist that often feeds on carrion. Aggressive, it msy chase vultures away from road kills. Widespread in the American tropics, it enters our area (US) only near the Mexican border and in Florida. “Caracara” comes from a South American Indian name based on the bird’s call.” 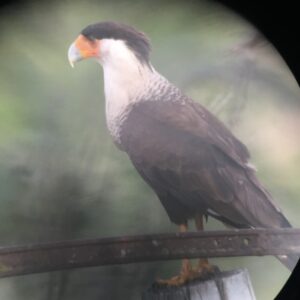