After the challenges of Antarctica, it is only fair that you get a reprieve to collect yourself for the remainder of this long journey. Tasmania is that reprieve. No climate extremes. No altitude sickness.  No imminent danger of death from volcanoes, avalanches, crevasses, earthquakes, tidal waves, or bandits; just a beautiful run through beautiful country.

After leaving the beach on Cockle Bay Road  you will be traveling north on ravel roads thru the woods, with glimpses of the ocean to your east. After passing Rocky Bay, where you landed, you will pass alongside colorfully named Coalbin Bay and Pigsties Bay before turning into the woods after about 10 kilometers.

Just after 30 kilometers, you will hit pavement. Houses that had been becoming more frequent give way to actual civilization.

And then comes the unexpected, as you will run right thru the heart of Tasmania wine country.

100 kilometers in you finally get to see some Tasmanian hills, as you cross a couple of 1500 foot climbs crossing spurs off of Mount Wellington on your entry into Hobart. While you will get a few scenic overlooks, you will not get a good look at Mount Wellington, because you are too close up to see the top! You will be able to look back and see it best from the other side of Hobart.

After leaving Hobart at 120 Kilometers, we have another 250 kilometers to reach our rendezvous with the Dornier at Low Head. You might think that this would be a journey of many climbs and descents, but the truth is, the two climbs that brought you into Hobart are the only significant hills you will encounter, as the course winds its way through valleys and into the central plains, sometimes surrounded by mountains, but never crossing any of them.

As you cross Tasmania you will have a feeling that you are missing “Tasmania”, as you are hitting none of the picturesque tourist scenery. But, as you make your way past farmlands and pass thru small towns and villages, you will realize that, unlike the other tourists, you are seeing the real Tasmania.

You become familiar with the small, low Tasman houses (I think they call them cottages). You find out that the Tasmans take great pride in their agricultural products, believing them of superior quality to the foods produced elsewhere. Maybe you get to taste Wasabi Cheese. Maybe (surely) you will see a Brushtail Possum… They are not related to the North American Opossum, and are generally considered pests, but the ones in Tasmania are very attractive with thick fur to combat the often cold, rainy weather you will get a taste of during your trek across. Definitely you will get to talk to people, because you are doing something quite out of the ordinary. And, you can always take a day out to make a side trip to the mountains that are almost always visible in the distance. By the time you reach the Low Head Lighthouse and your pick up on the Dornier, you will feel like you know Tasmania like a native.

Landing near the outlet of the Tidal River, you will want to time your arrival with the high tide. The launch is not going to be able to get you particularly close to Norman Beach even at the best of times. Land at low tide and you are going to have a long trek thru shallow water and then across an endless expanse of sand before you finally get to miles that count.

You are landing on a peninsula known as Wilsons Promontory, basically a large island connected to the mainland by a long finger of land. This is one of the largest unspoiled sections of the Australian Bush, and you will get to see the land as it once was while climbing from the  Tidal River up into the hills overlooking the Southern Sea.

Your first 30 kilometers in Victoria Province are going to be an incredible treat. You will be running through the unique scrubby forestlands teeming with wildlife and little sign of human habitation except the unfortunate tourists in cars who will not get to see a tenth of what you get to see. They would not get to see nearly that much, if it were not for the pulloffs all along the road just for the purpose of wildlife viewing.

If you can avoid getting in too much of a hurry, there are side trails to see unique features. I highly recommend that you take a little time to make the short trip to see the Big Drift,

a two kilometer section of stunning sand dunes sitting up in the hills, smack dab in the middle of the scrub forest.

Leaving Wilsons Promontory it is 130 kilometers of pastoral countryside and small towns to reach Melbourne, a tiny hamlet of 5 million.

Every big city has its distinctive skyline. In Melbourne the skyline is dominated by the Star of Melbourne. The giant ferris wheel must be some kind of British thing, if you don’t believe me look up the Eye of London!

After Melbourne you will be heading down to the Murray Basin. Australia’s East Coast is dominated by the Great Dividing Range, which forms a sort of continental Divide, with rivers on the East side flowing the short distance to the sea, while on the west side everything flows into one of the three great basins that extend across the continent from north to south. To the north is the Carpentaria Basin, A number of small rivers flow into the ocean there during the rainy season and then dry up completely during the dry season. The center of the country is filled by the Eyre Basin. Most of the rivers in on the west side of the Great Dividing Range empty ultimately into Lake Eyre, which has no outlet. Lake Eyre is usually a large salt pan, but about every three years the rain is sufficient to temporarily fill it with water. The southern part of the basin strip is the Murray Basin. The Murray is Australia’s longest river at about 2,500 kilometers, but it does not flow north to south into the ocean, but instead comes out of the Great Dividing Range and flows west across the basin before turning south at the western edge of the basin and flowing into the ocean near Adelaide. Lake Eyre is also on the western edge of the Eyre Basin, as they tilt slightly from east to west.

Most of the water in the Murray comes from the mountains, but its use to irrigate crops in the Murray basin has turned that into one of the richest agricultural areas in Australia. This is not without a cost as the combination of polluted runoff and over-extraction of the water for irrigation threatens to “kill” the river system ecologically. Not that you will notice any of that as you run, pedal, or laboriously cross country ski steadily downhill for more than 600 kilometers. You will not be close enough to the river to see the irrigated fields, but this part of your route really is the Australian equivalent of the heartland.

After 1230 kilometers you will reach the Murray Bridge. On the other side you will skirt north of Adelaide and head into the Flinders Mountain Ranges. You might want to take a side trip to Adelaide, as it is the last city you will see in Australia…

After Port Augusta you will shortly turn off onto back roads to cross the Simpson Desert just west of Lake Eyre. (AU 21-23) This is 1200 kilometers of utterly desolate countryside. But you have a reasonable chance of spotting a feral camel along the way.

Coming out of the desert your next stop is Alice Springs. If you are like me, you always pictured Alice Springs as some lonely desert outpost… maybe a weather-beaten general store surrounded by nothingness. In reality, you will find a bustling little city at the crossroads of a number of multiple highways.  The temperature can still range from 120 degrees to 20. And it is still surrounded by nothingness. But Alice Springs has all the amenities that you have been missing for the last 1200 kilometers.

North of Alice Springs you will be back on an actual highway. While it will be arid and semi-desolate, you will pass by the odd settlement. Sometimes they will be nothing more than a place name on the map. Sometimes there will be a few houses and maybe a bush store. Whatever you find, the kilometers will continue to slip past beneath your feet, and the north coast draw ever nearer. Along the way you will truly experience the size, the power, and the beauty of this immense land in a way that can only be absorbed by doing it under your own power… day after day, and week after week.

At the end, when you start coming on actual green, and even palm trees, you will know the end of your 4,250 kilometer trek across the great down under is near the end. It began with a flight on a Dornier from the polar ice, and will end with a Dornier flight to the tropics. No other region will see you experience this amount of change.

You might have heard that you are traveling from Australia to Indonesia, however that is not quite the truth. There is a long story behind the existence of East Timor… but we will pass that story along after you start your trek. We have expedited your entry into East Timor and you will have the standard 90 day VISA. Should your team proceed so slowly that you cannot cover the 107 kilometers to the Indonesia border within 90 days; then you must apply for the VISA extension. The fines for overstaying your visit are punitive! 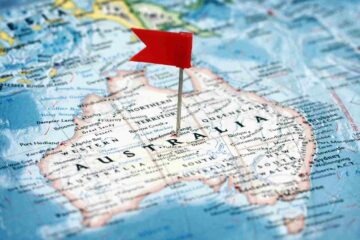 Region#5 Country#14: Australia I know what you are probably thinking; “Don’t we go to Tasmania first?” Even though we tend to think of them as separate entities, Tasmania is actually a state of Australia. And Read more…