Your entry into Nicaraugua is something special. You depart Guasaule, Honduras and cross Rio Guasaule into Guasaule Nicaraugua. Your Nicarauguan tour will be one of the most scenic of the trip so far.

You can breathe a sigh of relief, as Nicaraugua is the “safest” country thru which you will travel during Region 1, the definition of safe being measured in Central American terms. Safe or not safe, you need to stay on top of where you are on the map when passing thru cities. Thanks to the quaint Nicaraguan tradition of having no street name! Geologically, you are back in a very active zone. Nicaraugua has some 40 volcanoes, and we will be running a gauntlet of them on our route.

Earthquakes are another regular part of life. Nicaragua is your best opportunity to see geological events happening in human time! The population of Nicaragua is mainly concentrated in Pacific Coastal plains over which we will pass during our trek.

The bulk of the country on the Gulf side is inhospitable sparsely populated mountain and rain forest, thus Nicaragua has the most biological reserves in Central America, we will pass directly through the Apacunca Natural Reserve.

Nicaragua produces the usual Central American staples of sugarcane, bananas, coffee, and cotton for export, but in addition produce a significant amount of beef. And while they also have the usual agricultural produce for local consumption (led by corn, of course) plantains and cassava are also main crops. Plantains look just like bananas. Actually they are a type of banana, but starchier and with less sugar.

Unlike bananas they need to be cooked to be eaten. Cassava (also called manioc) is a root that can be peeled and grated into a sort of flour or used much as a potato is used. Wild cassava contains chemicals that can convert into cyanide when eaten, so preparation to remove those chemicals is critical. Domestic cassava has less of those chemicals.  Plantains and bananas originated in Southeast Asia, and were brought to Central America by Europeans. Cassava is native to Central America, and was introduced to Southeast Asia, where it became a staple.

When the Spanish conquered Nicaraugua, it was mainly populated by hunter gatherer tribes, other than some pockets of Maya and Aztec near the present day border with Honduras. The Spanish again fought often with each other as various leaders vied for control of the area. The Gulf coast was controlled by the Mosquitoes under the protection of the British and even after the British withdrawal, the Mosquitoes remained autonomous almost into the 20th century. The Spanish founded two major cities; Leon and Granada. Leon became the center of the liberals and Granada the conservatives. So contentious was the feud between the two rival cities that, after having passed through the obligatory stints as part of the Mexican Empire and as a member of the Federal Republic of Central America, independence was settled by naming Manaugua as the national capital.

There are a lot of common threads in the history of the Region 1 countries south of Mexico between 1520 and 1840. The indigenous people conquered by the Spanish and decimated by disease and brutal slavery. The individual Spanish Jurisdictions becoming a part of first New Spain, then the Mexican Empire, and the Federation of Central American States before finally achieving independence. Independence, unfortunately, followed a common thread of dictatorships, oligarchies, and the confiscation of land from the peasants to enrich a few, while the masses literally starved. And you can add to that US intervention building in the late 19th century and peaking in the first half of the 20th. Nowhere was the US intervention on behalf of the US business community more blatant than in Nicaraugua where they literally occupied the country militarily from 1909 to 1933, protecting US business interests while standing idly by during the internal strife. Learning the history of the area, the oft heard call for “Land Reform” suddenly makes sense.

All that aside, you are still in for a memorable trip thru this country.

You will never be out of sight of great volcanic cones. From Guasaule we wind our way across the gulf coastal plains dropping down thru the Apacunca Nature Reserve before winding our way gradually up thru the scrub covered hills to Lago Xolotian at 2740 kilometers, the first of two large tectonic lakes near the Pacific Coast.

With no outlet, except during flooding, and the capital city of Managua on its shore, Xolotian is one of the most polluted water bodies in the world. The vast expanse of brown water, with the surrounding greenery and foreboding volcanoes rising from its shores is still a memorable sight. After traveling 70 kilometers down the lake front we come to Managua.

From Managua we turn south to cross the neck of land between Xolotian and  Granada to reach  Lago Cocibolca.

This stretch will be memorable, with several smaller lakes, countless hills, and picturesque small villages wrapped around a grueling climb over the flank of Masaya Volcano.

For those so inclined, it would only take a short side trip to stand at the edge of the crater at the top and look down into its steaming depths.

The views from the top of the volcano are amazing.

After descending Masaya, we travel around the massive double cone of Mombacho, emerging from behind it to our first sighting of the magnificent expanse of Lago Cocibolca. 110 miles long, with an average width of 36 miles, Cochibolca and its sister lago Xolotian are thought to have once been an ocean inlet, which was cut off from the sea by volcanic activity. Although Cochibolca is only 121 miles from the Pacific, it drains into the Caribbean along the 112 mile San Juan River.

The US intense interest in Guatamala was stimulated by a plan to build a 12 mile Canal from the lago to the pacific in conjunction with the San Juan River to make a transoceanic passage. After the US took over the Panama Canal project from the French and completed it, they no longer wanted to see a canal built in Nicaragua to compete with the US owned Panama Canal. The US government bought the rights to develop the canal, and then stationed troops in Nicaragua to make certain it was never built.  By 2910 kilometers you will be riding right along the lakeshore, looking out over the waters at the twin volcanoes Maderas and Concepcion which rise from its waters.

After 30 kilometers of this magnificent view you will turn away from the lake and climb up to the Costa Rican border at Penas Blancas.

Crossing the Border from Penas Blancas Nicaraugua to Costa Rica:

The Immigration Building in Penas Blancas is a modern-looking three story white building with large dark windows. When you get inside there will be a booth to your right where you will pay a $1 Municipal tax and $3 exit tax. If you need the use of a restroom, that will be another $1. After you get your Nicarauga exit stamp take the main road on into Costa Rica. You will probably be stopped a couple of times to check your papers.

When you reach Costa Rica you will see the Immigration building, with orange barriers marking where to form a line. Expect to wait between 20 minutes and 3 hours. You must present a return ticket home, or a ticket out of the country within 90 days to enter Costa Rica. There is a bus station right outside the Immigration building where you can purchase a ticket back to Nicaraugua for about $25. Present this ticket, along with your Passport and Immigration form and you should receive a stamp for 90 days. Check to be sure it is for 90 days, as you will not want to rush your trek thru Costa Rica. When you get your papers back there will be a 2” x 2” piece of paper stapled to them. No one will tell you what it is, but you must not lose it. This is the only thing that will allow you to physically leave the border area!

Nicaragua is a beautiful country, because the people there are wonderful!

This photo is of a typical country school in Nicaragua. This school is in Chinandega – just north of Managua. Managua is much more developed than Chinandega. Managua is busy, drivers go where ever their car can fit through. The people there take great pride in their work, and work so.dang.hard.

Life has been hard in Nicaragua for a long time. Then the political unrest caused major safety concerns for locals and travelers. It was so unsafe, that people couldn’t leave their homes some days to go to work. Then Covid. If we think dealing with Covid in the US is hard, it is nothing compared to what Nicaraguans are having to endure. 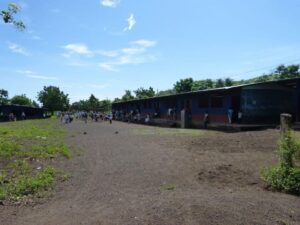 This is Monkey Head Island. It is on the west coast of Costa Rica.

The sand is black because of the lava deposits the volcanoes.

Because of the heat in the sand, it is very common to bury pigs and allow them to cook.

I visited Nicaragua just this January. I ran early every morning on the Pan Am Highway and took a celebratory cool-off swim in the pool at the hotel when I got back. Our home base was Hotel Los Volcanes in Chinandega and each day we were out visiting folks in Leon, El Viejo, Las Brisas, PDP. I have fond memories of the meals we ate down there and the kindness of the people. One evening in Leon we were treated to a huge meal with close to 20 people at the table. We had nacatamales, which are corn meal stuffed with peppers, potatoes, pork, spices, garlic and whatever else can go in there – wrapped up in a plantain leaf and steamed. It is delicious and filling.
Volcanoes are all around and fresh fruit grows on the trees just like so much of central America. It really is paradise, except for what has been done to it politically by colonization and empire. 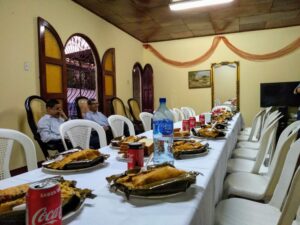 CRAW Region #1, Country #4: Honduras Our trip thru Honduras is the shortest time we will spend in any of the Central American Countries, as we pass only across the small projection between El Salvador Read more…