You will see the difference as soon as you cross the border, more farms, paved roads, but still lots of motorcycles. The benefits of the Dutch infrastructure, as opposed to the ignored Portuguese colony are obvious. It makes you really wonder why the East Timorese were so attached to the artificially drawn colonial borders. But we have seen the same phenomenon across all the Regions so far. But, after several hundred years with those boundaries, so many generations, those borders have become a part of the culture of the place.

About the only place to get food before you reach Kupang will be at roadside markets. Don’t be expecting any exotic local foods, as markets in Indonesia have mostly fast foods: U.S. apples, table grapes, oranges, lemons, processed vegetables (French fries), processed fruits (dates, raisins, jams, nut paste); snack foods and juices.

After another 50 kilometers or so of coastal plain, you will cross the Sungai Benanin River and climb up into the mountains. They are not huge mountains, but you will climb close to 3,000 feet, with lots of ups and downs before finally descending to cross the Mina River, climb over another 2,000 foot ridge and then drop on down to Kupang to catch the Ferry across the Savu Sea to Sumba Island.

Artificial Colonial Boundaries aside, Each Indonesian island has its own unique character and culture. Sumba is not the most famous of the islands, but it takes a back seat to none, with some spectacular waterfalls in its mountainous center that you can visit with only a small detour off course, and the inimitable traditional houses.

Like much of Indonesia it has been severely deforested. However, in the forest that remains, Sumba is known for its birds, many of which are found nowhere else on earth.

Sumba itself is something of an anomaly, as it is composed of limestone rather than volcanic material and has no volcanoes, even tho it lies in the volcanic belt. It is uncertain if it is a piece of the Australian Plate, or a detached fragment of the Southeast Asian margin.

You will land at the northeastern tip of the island and trace your way just inside the coast. About 20 kilometers in you will come to a small white building with a sign on the front that identifies it as the Putri Rembar (twin sisters if you haven’t yet learned Indonesian). This is the best eating place on Sumba. Don’t pass it up!

If you want a real meal, we recommend the Soto Ayam (Chicken Soup) if it is just a mid-day repast the whole team can share a tray of Aneka Gorengan (assorted fried snacks).

100 kilometers in you will come to Waingapu, where you will turn up into the mountains. This will be your last chance to see the beach, as the remainder of the run will be up in the hills, until you drop down into Kodi Bangedo to catch the next ferry.

Once in the hills most of your scenery will be small villages, numerous roadside shops, and the ubiquitous motorcycles. On these narrow roads you will be glad it is not a landscape of big, American SUV’s. On the steeper climbs and descents the structures will clear out, but you won’t get many views due to the tall growth alongside the roads.

Along the way you will pass thru the city of Waikibubak, where you will pass right by the famous City Horse Statue, and have the opportunity to luxuriate at the Hotel Karanu, or any of the other fine hotels in town… which generally have attached restarano in Indonesia.

At last you will drop down out of the hills to the coast and pass thru the city of Kondokodi to reach the Sumbawa Ferry. Sumba has been something special, and I am sure you will be loathe to leave so soon. Especially when you see the Ferry…. I think it is important to remember that the ferrys only sink rarely. I am not sure if they are more or less dangerous than the Volcanoes, earthquakes, and tidal waves.

The next stop is Sumbawa Island

Yowza, that is one scary ferry! 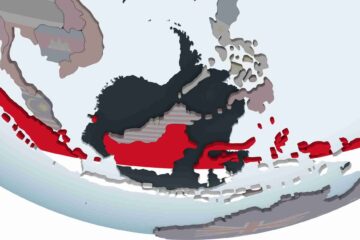 And now, at last, we come to Bali. Bali is finally a place that I had heard of. However, having heard of Bali is a far cry from knowing anything about it. I think we Read more…

Sumbawa Island What changes you will find across that short stretch of ocean. Sumba was a limestone island, with the population split between the religions of Marapu Animism, Dutch Calvinism, and Roman Catholicism. Sumbawa is Read more… 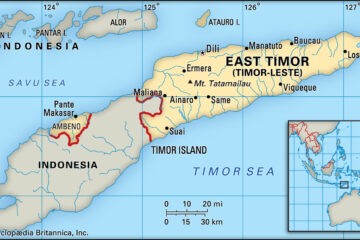 Region#6 Country#15: Timor-Leste There could be no better place to begin our trip through the islands that surround the South and East of the Eurasian Continent than East Timor. The very existence of this tiny Read more…